After a week of learning and practicing emergency backcountry response skills, the participants in our 2018 Wilderness First Responder (WFR) class were presented with a night-time scenario to test their understanding, memory, and execution. 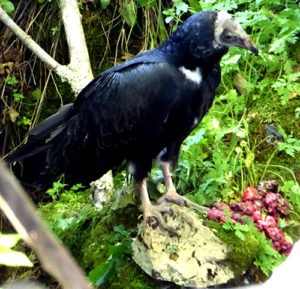 “The night rescue was the hardest because we had to work in this sinkhole with a patient who had multiple life threatening issues and vultures were hissing at us. Yea, that’s right, actual black vultures were nesting in the sinkhole. I heard the hissing at first and wondered what it was,” remembered Nick Muehlbauer, a course director and field instructor at Experience Learning. 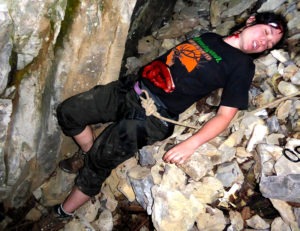 Please Note: This is a test. This is only a test of the Emergency Response Team.

The scenario was that Vicki and her friend Dylan had been out climbing all day and were trying to climb down into a sinkhole. Vicki lost her grip and fell, sustaining several life-threatening injuries. She eviscerated her 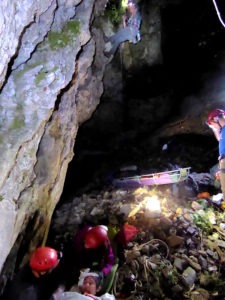 intestines, broke her femur and pelvis, got a skull fracture with exposed bone and a second chest wound.

The team had to draw deeply from the skills they learned throughout the week to stabilize and properly immobilize the victim before raising the stretcher out of the cave on belay. “Remembering how to make a traction splint was a key skill,” Nick said, “and how to properly bandage a chest wound so we could ‘burp’ it and let air out of the diaphragm.”

Beyond this scenario, Nick said that the WFR course was “very hands on and gave you lots of opportunities to practice the skills. Matt (the instructor) had a lot of really good complicated scenarios that would challenge you and get you to think deeply and practice the harder skills we learned.” 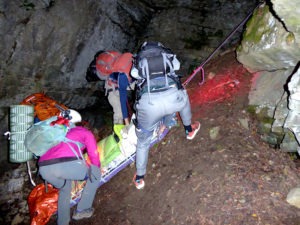 Next up in this series: Wilderness First Aid, April 6-7, 2019. This 2-day course covers basic wilderness emergency response, using the gear in your pack. This is an ideal course for casual hikers, mountain bikers, cavers or climbers, rural living, and urban disaster response.