Our organizational memory alerted me of the first class course that we ever ran: a 1974 Potomac River trip with a class from Davis and Elkins College in Elkins, WV. I spoke with Heidi Arnett (nee Mailloux) and Harriet Collins (nee Holtzworth), the only two women in the class of a dozen students who made the voyage. I was curious to see what their personal memories had retained over the years.

The trip was offered as an elective class focused on the history and ecology of the Potomac River. The group was led by one instructor: King Seegar, a founding member of the Woodlands and Whitewater Institute and current board member of Experience Learning. Under King’s guidance, they camped their way down the Potomac in tube tents and sometimes-wet sleeping bags. “It was a brave trip for one leader to take,” Harriet said. “Well before the days of cell phones or easy communication. That was really an undertaking to set out on with some college kids.” 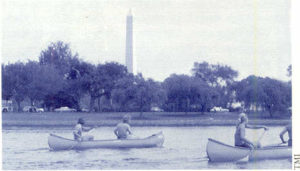 The “floating library of the Potomac,” contained in a waterproof bag, served as ballast in King’s canoe and reference material on all topics Potomac-related as the group traveled from the Headwaters to the Watergate building in Washington, D.C..

Heidi, a native and current resident of Helvetia, WV, did not grow up on the water. “I’m a chicken. My mother was the one who went climbing in Nepal and she was a wild thing. But honestly, that river course was scary for me because I’m not an extreme canoeist. What rapids are we going to hit today? And it made me tense. It was a stretch and it was good for me.” So she signed up for the course and talked her friend Harriet into joining her.

Harriet told me that, “I remember much of the trip vividly, unlike a lot of things I have done in the past. Later in life when difficulties arose, looking back to that accomplishment provided courage to keep going. I learned a lot on that trip, about myself and others, about the river as we followed it from the pristine headwaters through thrilling white water and then endless slow stretches, to the polluted DC area with signs warning against contact with the water. I learned endurance.”

Harriet most clearly remembers some of her mistakes. “The first day in our canoes, my canoe had the majority of the fresh fruit and we went into a turn with a swift current and were swept up against a fallen tree and there went the melons, floating down the river. I remember wet sleeping bags that night.”

Harriet now lives “in the woods” in the western part of West Virginia and lives an active life homesteading and enjoying the outdoors. However, she says that even 45 years later, “every time I get into a kayak or canoe my first thought is of losing that fruit!”

Of course, after losing all the fresh fruits and vegetables to the inevitable downstream movement of the water, “We had a very basic diet. It took me years until I could eat oatmeal or cream of wheat again. Every morning we ate those and we had canned meat which we added to pasta or rice.”

The trip took place in May so sunburnt scalps and hands alternated with chilly situations when water splashing, canoe tipping, rain and wind conspired to cool things off. Heidi remembers the “one day we had to get off the river early because of hypothermia. It had rained and rained and everyone was drenched and we got off the river and stayed in an old dilapidated chicken coop that we found and we were so grateful. King was eager to get everyone warmed up with hot liquids. It was our only night not in tents for the whole month.”

Some of the guys, Harriet said, “Had trouble with hellgrammites. Not getting bitten by them, but being afraid of them. The tube tents we slept in were open at both ends, so we were exposed to the elements and any wildlife that might wander by.”

They both remembered their canoe partners well. According to Heidi, “ Joe Lochs, my god, he was a great guy. They called him Pigpen because I was a bit of a neat freak and he’d get in my cleaned out canoe with muddy boots and slop around. Harriet almost didn’t go when she found out he was on the trip because he was a very popular guy on campus, a real partier. But he ended up being the sweetest, dearest person in the whole world. Just a great guy.”

And they both remember clearly the final meal at the Watergate Building. They had packed along a clean outfit of clothes specifically for the occasion. They pulled their canoes up on the riverbank outside of the building. Heidi’s dress was tight due to muscle development from a month of paddling and Harriet remembers that the wait staff served them water that the group had collected at the headwaters, and carried with them the length of the river.

At Experience Learning, part of our goal is to inspire individuals to become informed citizens who participate and contribute within their community, so it made my heart beat faster to hear Harriet say that she hopes, “Educational opportunities like the one I had continue to be available for others. I try in my small way to educate when I help with field trips for the Ohio River Islands National Wildlife Refuge and assist with homeschooling my grandsons.”