In Loving Memory of Ajax Eastman, Founding Board Member/Educator at SKMC 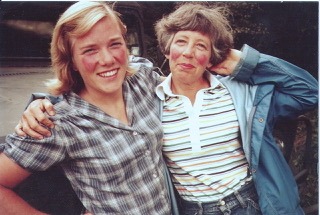 Alice J W Eastman (on right in photo) loved the outdoors from early childhood. She earned her lifelong nickname “Ajax the Mighty” as the smallest but most engaged little girl at summer camp in Maine. She and her husband Tom “Easty” Eastman, a Baltimore attorney, were friends of Dan Taylor’s parents at Brown Memorial, an activist church in Baltimore, and came enthusiastically on board — literally, Easty was the second board chair after King Seegar —  at the founding of the Woodlands & Whitewater Institute in 1972.

She helped recruit Baltimore schools for the mountain programs, and told the Baltimore Sun in 2013, “Some people like cathedrals — I love wildlands. They lift my spirits.” Ajax loved every minute spent on Spruce, where her 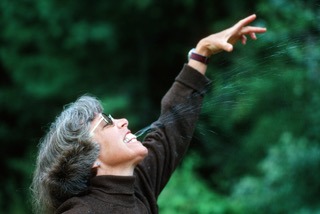 interests in educating children and the environment intersected. Over the years she worked many school courses. Jane Seegar particularly remembers an incident on an orienteering trip up the mountain when a student tossed a small food wrapper in the woods. Ajax turned her around, firmly said “open your mouth,” and flicked the little balled-up piece of paper into it. To the astonished students she said, very kindly, “Let’s think about what we’re doing out here.”

Anyone who spent time outside with Ajax caught her infectious commitment to preserving the backcountry.  As a friend of the institute, she liked to see that there was an environmental component to any Woodlands program: at-risk family interventions, international medical, caving, climbing, canoeing, Scholars, schools. It was Maryland Governor Glendening who called Alice Eastman “everybody’s environmental conscience” when, in 1999, she was commissioned an honorary Admiral of the Chesapeake Bay for her work at the Chesapeake Bay Foundation.

Their sons Tim, Dusty, Todd, and Nick scrambled all over the building sites very early on during the development of the property, from renovating the base camp (lower house), to putting up the high camp tent platforms, shower house, and first yurts. Todd in particular excelled during the climbing programs, and all are lifelong outdoorsmen.

Ajax had a 40-year legislative agenda for the state of Maryland:  greener and cleaner. She was a prolific writer to newspapers on environmental matters, and coined a term for corporately-hired scientific experts: ‘bio-stitutes.’

In Maryland she was a founding member of the first modern statewide environmental organization, which came to be known as the Maryland Conservation Council. The following year she began the first of six terms as Maryland Conservation Council president, and for 18 years was editor of The Conservation Report, its legislative newspaper that served as a source for environmentalists and reporters, and chaired the conservation council’s Maryland Wildlands Committee. An area of 1,100 acres along the Gunpowder River has been named the Hartline-Eastman Wildland. 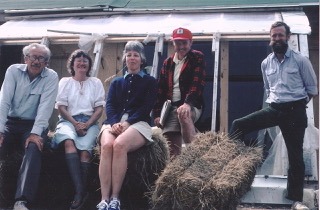 Ajax’s last time on Spruce was at a get-together last fall for the inauguration of Experience Learning. She was enthusiastically in favor of the new organization, telling King as she and Easty were leaving the mountain, “We love what is happening here and look forward to any help we can give. We have always treasured our time up here and can’t wait to see everybody next June.”

To our immeasurable loss, that is not to be. Thank you, Ajax, for all you gave of yourself to this place, and to each of us. We will carry your legacy forward:  preachin’ and teachin’, Greener and Cleaner!

Read more about Ajax’s environmental work in her home state of Maryland.