Meet the High Camp Society: In Your Backyard; Out of the Ordinary 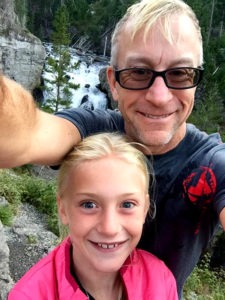 Mark Wenzler is an environmental advocacy lawyer who works for the non-profit National Parks Conservation Association in Washington, D.C. His work takes him to spectacular wild places from Alaska, to California, Montana and Maine, but West Virginia and Spruce Knob hold a special place in his heart.

Twenty years ago when Mark moved from New Jersey to Washington DC he set out to answer the question of ‘Where is my wilderness going to be?’ Some friends suggested he check out Spruce Knob and the Seneca Creek Backcountry and he was sold from day one. Over the years these woodlands have been the backdrop of many formative experiences for him and his family. The Mon is wild, it is incredibly diverse, and it is accessible to many ages, ability levels, and population centers up and down the east coast. 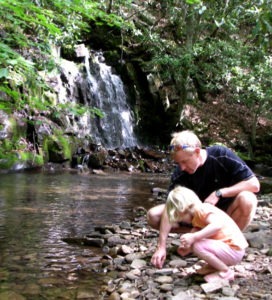 “Smoke Hole is the first place my wife Dare and I took our daughter Nina to camp when she was a baby, and Seneca Creek is the first place I took Nina backpacking (pictured, right) when she was four years old. She walked part of the way but I also towed her in my Chariot. It was such a magical experience for her: her first time being deeply in nature.”

As Mark’s daughter grew up he found the process of signing her up for summer camps in the DC area frustrating. His daughter, “attended Girl Scout sleep away camp, but she was nearing the end of that. She was ready for a different challenge and something closer to nature.” Mark had met our now-executive director a few years before when she had been his instructor for a telemark ski clinic. She pointed him to our Mountain Stewards Summer Camps and Nina went for it. Her first words when he picked her up? “Dad, I want to go for 2 weeks next year!”

At that point, Mark’s whole family, already big fans of the Spruce Knob area, fell in love with our Spruce Knob Mountain Center and the way we approach our programming. “You challenge them in a very supportive way to take risks, and try things. We saw the transformation immediately in Nina.”

“A lot of summer camps aren’t combining the learning aspect and the stewardship aspect the way you guys do, there’s a doing and a learning, and a personal growth aspect. It just hits so many important things.”

Employed in the non-profit industry and living in the middle of Washington, D.C. means that Mark doesn’t have large amounts of disposable income to throw around. But when we put out a call for donations for camp scholarships, Mark Wenzler was the first one to respond. “That was the first time I had made a contribution and it felt really important to me that kids who don’t have the means have access to that opportunity as well.”

So now Experience Learning has “become a part of our lives ever since.” Every year Mark and his family come up to the Spruce Knob Mountain Center for Family Night and get to know the place more deeply. “Of course it’s beautiful, but the community of people, the staff, and the people who participate really make it special from my perspective. They are as inspiring to me as the place itself.”

The High Camp Society was established in 2017 to create a solid foundation for the future growth of Experience Learning. The financial contributions from our High Camp Society allow us to focus on our mission and developing the most effective programs to reach more kids each and every year.